Scientists in the U.S. claim to have successfully upcycled PET waste bottles into an electrochemical active-carbon material that functions as a double‐layer supercapacitor substance. They said that this achievement may lay the ground for the production of more sustainable batteries. Devices built with the proposed technique would not store as much energy as lithium-ion batteries but they could charge much faster.

In the paper Upcycling of polyethylene terephthalate plastic waste to microporous carbon structure for energy storage, published in August in Energy Storage, the U.S. group describes the process for upcycling PET waste bottles into an electrochemical active-carbon material that works as a double‐layer supercapacitor substance.

PET plastic bottles are first dissolved in a solvent which consists of a mixture of trifluoroacetic acid and dichloromethane. Then, through a process called electrospinning, microscopic fibers were fabricated from the polymer and the plastic threads carbonized in a furnace. “After mixing with a binder and a conductive agent, the material was then dried and assembled into an electric double-layer supercapacitor within a coin-cell type format,” the academics explained, adding that the active material is able to perform as a supercapacitor with added pseudocapacitance.

The material is claimed to have both a double-layer capacitor created by the separated ionic and electronic charges and redox reaction pseudo-capacitance, determined by the ions that are electrochemically absorbed onto surfaces of materials. “Though they don’t store as much energy as lithium-ion batteries, these supercapacitors can charge much faster, making batteries based on plastic waste a good option for many applications,” the scientists stated.

They believe the technique could reach mass production soon although they want to improve the electrical properties of the nanomaterial with compounds such as boron, nitrogen, and phosphorous. “We believe that the proposed process is scalable, with environmental and economic advantages, and this study could present opportunities for future research and development,” they concluded.

In another study published in 2019, researchers from Indiana’s Purdue University proposed a method to extract pure carbon from plastic waste and turned it into anode material for lithium-ion batteries which powered a toy truck.

Material Recycling the voice of India Recycling Industry April – May 2021 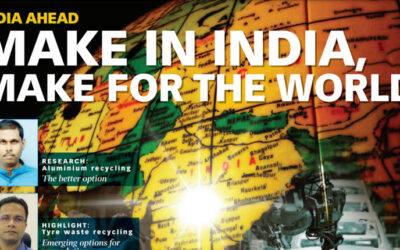 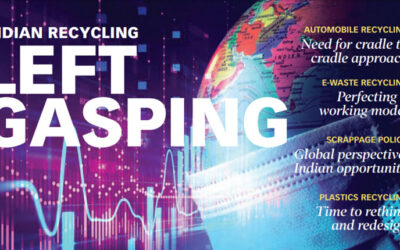